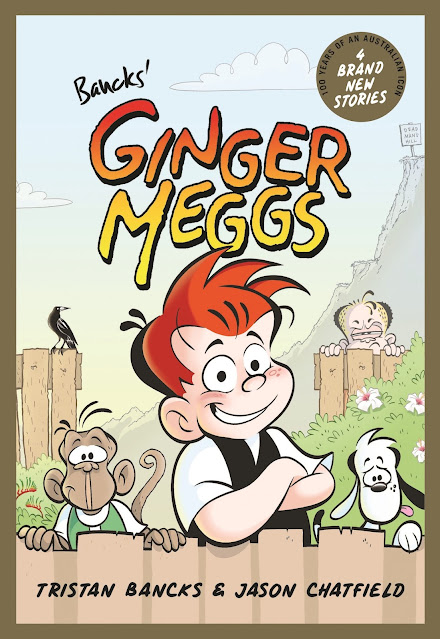 Iconic
Australian literary character Ginger Meggs is celebrating his 100th
birthday and you are invited back into his larrikin world with the release of
four new adventures.

Created by
Jimmy Bancks in 1921, his great great nephew, Tristan Bancks picks up where he
left off. These stories are illustrated by the current cartoonist of the Ginger
Meggs comic strip, Jason Chatfield.

Originally syndicated in over 100 daily
newspapers in Australia and the world. Ginger Meggs is one of the oldest
running comic strips in the world.

These four new
rambunctious adventures showcase Ginger Meggs and his friends as fun-loving
larrikins who always find themselves in trouble one way or another.

One of the
stories, Dead Man’s Hill finds Ginger
and his best mate Benny debating over claims made by snooty sneak Eddie Coogan.
Eddie reckons he rode all the way down Dead Man’s Hill in his billycart with no
problems. So up for a challenge the two friends build their own death-defying
cart and attempt the hill.

Recovering from
their first attempt the boys are deciding if it is worthwhile trying again, when
archenemy Jugears Johnson challenges them. Jugears Johnson, a meaner and
nastier version of Eddie has decided to hold the first ever billycart championship
where the winner has to successfully ride their billycart down the mammoth hill
– what could possibly go wrong? Are the boys up for the challenge?

Another story, Lamington Billionaire sees Ginger Meggs
the entrepreneur, selling his homemade lamingtons to save money for a trip with
his parents to New Zealand. Thinking he is on a winner, he shares his secret
for baking lamingtons with Benny. But when Benny starts his own lamington
business undercutting Ginger, it soon turns into the lamington wars as they try
to outdo each other with hilarious results.

The two other
stories featured in this book are also rollicking good fun – filled with the
comraderies of best mates, archenemies causing trouble and parents being well,
parents.

Anything that
can go wrong usually does, just with a slight modern twist. Ginger Meggs leaps
from the page and into your heart with his honest, well-meaning intentions and
children (and adults) of all ages will fall back in love with this character.